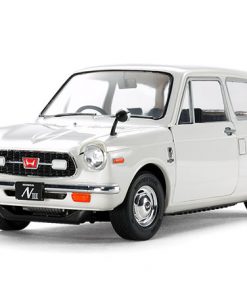 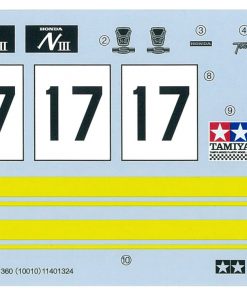 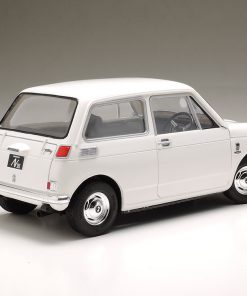 A-O-Kei
In March 1967 Honda announced its first 4-wheel passenger vehicle in the Japanese ‘kei’ class: the N360. It was an instant hit thanks to its quirky body shape and extremely roomy cabin despite being limited in size by ‘kei’ regulations. The 354cc 4-stroke 2-cylinder engine had an output of 31hp which dwarfed those of its 2-stroke competitors in the era, providing the car with an impressive top speed of 115km/h. In January 1970, a minor model change updated the car to the N III 360, with the dog clutch replaced by a fully synchronized 4-speed unit, and an updated front end with new frille and hood bulge. At the rear, turn signals and reverse lamps were enlarged. These modifications ensured that the N III 360 remained one of the most complete cars in the Japanese ‘kei’ class, which experienced a boom at that time.

The compact, quirky form of the car is recreated in style, with plated parts for bumpers, lights, grilles and wheels.

Remove the hood to take a closer look at the accurate depiction of the 354cc 4-stroke engine awaiting inside.

Both side doors are openable, to allow closer inspection of the interior, which has details such as ABC pedals and more.

Comes with a sheet of decals which are used to depict various logos and emblems, plus race numbers and go-faster stripes.